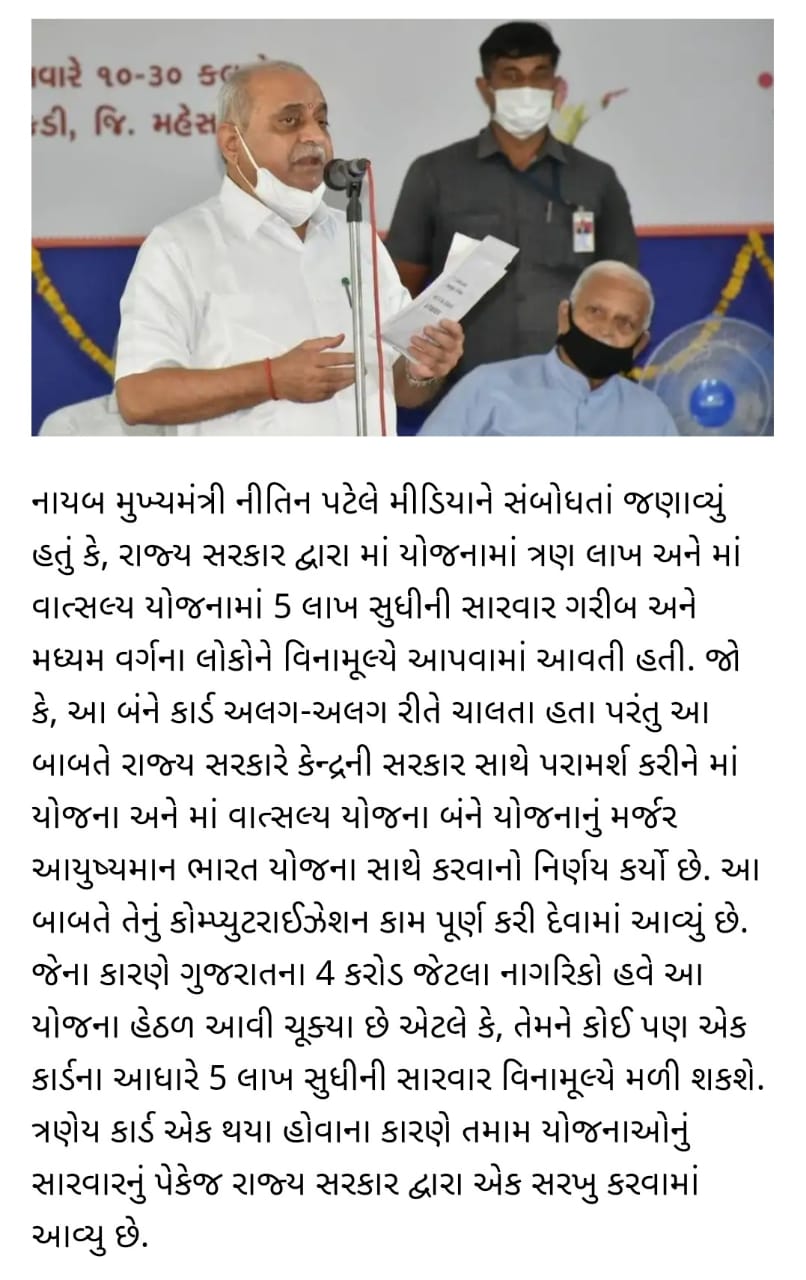 Deputy Chief Minister Nitin Patel said that up to Rs 3 lakh in Maa Yojana and up to Rs 5 lakh in Maa Vatsalya Yojana were provided free of cost and these cards were issued separately. Now, in consultation with the Central Government, it has been decided to merge the two schemes into the Ayushman Bharat scheme. Its computerization work has been completed. Now about 4 crore citizens of Gujarat have come under this scheme. Beneficiaries of any of these three schemes will be given free treatment up to Rs 5 lakh on the basis of a single card. The citizen will have to keep with them the scheme card and Aadhaar card given to them. These three cards are now merged. Treatment packages have also been made uniform in all the schemes.

People will get all the benefits equally under this scheme

He added that the benefits provided by the state government to the poor middle class family members for free treatment against serious illnesses under Maa and Maa Vatsalya Yojana up to Rs 5 lakh would also be available under Ayushyaman Bharat Pradhan Mantri Jan Arogya Yojana. The packages have been made uniform. So all the people will get all the benefits equally under this scheme. 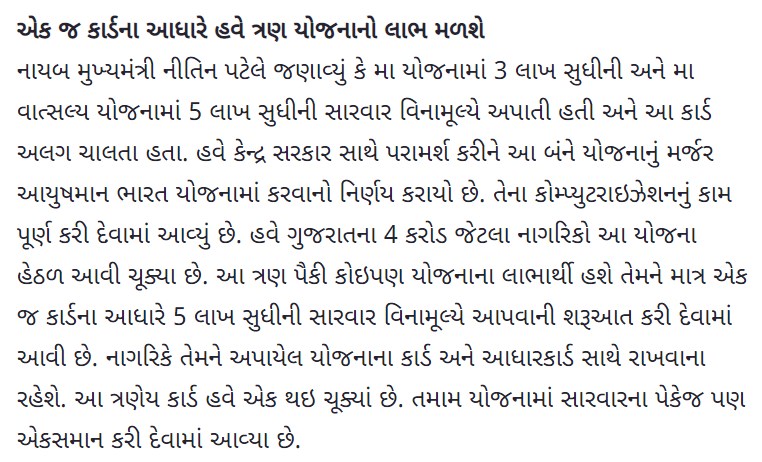 Launch of I.C.C.U. on Wheel and Telecardiology Service for Heart Disease Patients

Addressing reporters at the unveiling of new facilities at the UN Mehta Institute of Cardiology and Research Center in Ahmedabad, Deputy Chief Minister Nitin Patel said that these state-of-the-art facilities would benefit patients not only in Gujarat but all over India. He said the U.N. The availability of separate treatment for children at Mehta Cardiac Hospital will make it easier to diagnose and treat children with congenital heart defects from birth, leading to a reduction in infant mortality. U.N. With the capacity of Mehta Hospital being increased from 450 beds to 1251 beds, patients seeking heart treatment will no longer have to wait.

He added that the hospital is being funded by the state government and 80 per cent of the cost of treatment of the patients is being paid by the state government. The U.N. located in the Civil Complex. Mehta Heart Hospital is the first super specialty cardiac hospital in the country with 850 beds for children built separately at a cost of Rs 470 crore. U.N. Mehta Hospital has a large influx of patients from Gujarat and outside the state for the treatment of heart disease. The dream of the then Chief Minister and the present Prime Minister Modi to build a separate pediatric heart hospital with the aim of treating young children with special care has come true as this hospital is being set up.

See also  agriculture and information about farming and personal loan

What medical services are covered

U.N. The Pediatric Heart Hospital built at the Mehta Institute is the first of its kind in India with state-of-the-art facilities. In which patients will have easy access to heart and lung transplants. The telecardiology program will provide accurate diagnosis and treatment for children coming from the hinterland. He added that the UN Mehta Institute has 15 cardiac operation theaters, 5 cardiac cathlabs, a cathlab with a hybrid cardiac operation theater, 176 pediatric and surgical / medical ICCUs in the Children’s Heart Hospital. The bed is equipped with 355 Surgical Medical ICCU for Adults, 114 General Wards for Children with Heart Disease, 505 General Wards for Cardiology and Cardiac Surgery Patients, 67 Special Rooms and 34 Emergency Cardiac Care Departments.

The hospital has 35 intra erotic balloon pumps based on fiber technology. Which will help improve the need for adequate oxygen in patients and improve cardiac output. As many as 12 heart and lung machines have been commissioned with heaters and cooler units, which will be extremely helpful during surgery. The hospital is equipped with an ultrasonic cutting and coagulation system. Energy will be helpful in soft tissue and vessel sealing. Among other equipments, the hospital is equipped with various state-of-the-art equipments like 4 acmo system, one VATS system, 2 endoscopic vein harvesting system, one 3-D mapping system, pneumatic tube transport system, portable 3-D echo and color Doppler. The benefit of which will be to make patients faster and life saver